Before We Die and After, Too 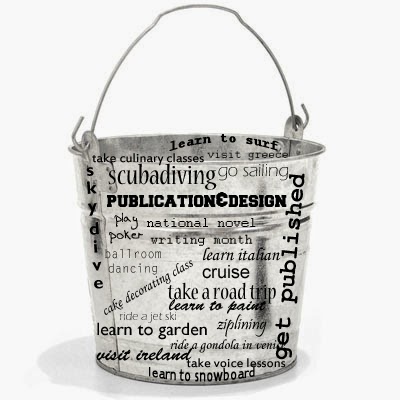 This is a repost of something I posted on my personal blog four years ago. (The friend mentioned is doing very well, by the way.)

A couple of weeks ago I went with a friend to her chemo appointment. There were a few others receiving chemo at the same time, and there was excited discussion in the treatment room about their bucket lists. I listened to them talk, but didn’t contribute, since I don’t have a bucket list, and as far as I know, have no pressing need for one.

My friend has a bucket list. She hasn’t told me anything about it except that it doesn’t include sky diving because it's too risky.

Cancer patients, she said, are encouraged to make bucket lists as part of their therapy. A bucket list can give someone something to live for — a few dreams to keep them going through treatments that can seem worse than dying. And I’d say that, therapy or not, most people with potentially terminal illnesses think about the things they want to do before they die.

I know my husband thought about it, but it turned out that what he wanted most was to keep on living his ordinary life. He delighted in the day he recovered enough from his first brush with death to walk to the curb and carry in the garbage cans. What he really wanted was to keep on providing for his family, raising his children, and caring for his students, with a summer fishing trip, a few visits from out-of-town relatives, and a round of golf now and then thrown in.

There were two things he added to his schedule once he knew he would likely die from his cancer: helping with the soup kitchen and lying on the couch every evening while the rest of the family took turns reading aloud to him from the Bible. We made it, in the time we had, through the whole New Testament except for Revelation; and through Genesis, Exodus, Joshua, Judges, 1 & 2 Samuel, 1 & 2 Kings, Psalms and Isaiah in the Old Testament.

We’d talked, before his illness, of going to Norway or Slovenia to see where his grandparents came from. We’d talked about visiting the Vietnam memorial. If he'd wanted, we could have done any one of those things after his diagnosis, because for some of the time, he was well enough to travel. But for him, the terminal diagnosis took items off his before-I-die list, and the items added were not spectacular, one-time activities, but new ordinary tasks. Tasks, now that I think about it, of discipleship.

The sermon last Sunday was about believers as disciples. We’ve been recreated, we heard, to do the good works planned for us beforehand. Afterwards, my friend with the bucket list was weighing things. Good works or bucket list? Which one should be her priority? For a believer, the answer is obvious, isn't it?

I told her, because she asked, that I think she should keep her bucket list but remember that she has no looming deadline. There is no time limit on her joyful activities. One day she'll be able to do the things she loves in the new creation, although she won’t be calling it a bucket list there.

Maybe she'll put sky-diving on her after-I-die list. There will be no risk to it then.
Posted by Rebecca Stark at 5:30 AM