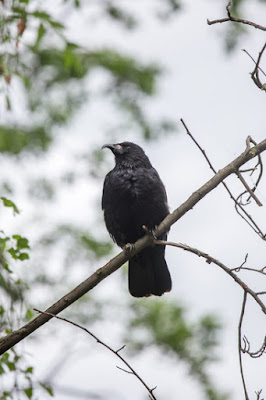 
The area where I live is known for its raven population. Like most of the people around me, I have a love-hate relationship with them. Ravens are scavengers, and if I don’t lock the lids tight on my garbage bins in the winter, they will pick my trash, steal bits of food waste and spread the packaging in the street. I once saw a raven fly away with a large chunk of cheddar cheese snatched from a bag of groceries left in the back of a pickup in a supermarket parking lot. I’ve also seen one fly off with an entire road-kill squirrel in its beak. Ravens aren’t picky. They eat what they find—dead animals, live prey, duck eggs, wild berries, groceries, or garbage.

Ravens are the greedy geniuses of the bird world. Sometimes they cache stolen food so they can come back for it later. And believe it or not, they find their caches again because they remember where they are. Ravens also spy on other ravens to see where they stash their scavenged goodies. Later, if the opportunity arises, they will return to steal their neighbour’s food. Sometimes a hoarding raven will even move a cache because they suspect another raven knows where it is.1 Ravens thrive in a hostile environment by using their strength and wits to provide for themselves.

Yet the Bible teaches that God feeds the ravens. “Consider the ravens: they neither sow nor reap, they have neither storehouse nor barn, and yet God feeds them,” Jesus said. (Luke 12:24). “[God] gives to the beasts their food,” the psalmist wrote, “and to the young ravens that cry” (Psalm 147:9). Ravens scavenge and hunt, and when they succeed it is God who has provided for them. He works through natural means—ordinary cause-and-effect relationships—to care for creation. If I leave the lid on a garbage bin unfastened and a raven finds a stale crust inside, I have acted from my own forgetful nature, and the raven has done what ravens naturally do. But standing behind this meal from scraps is God who orchestrates everything to provide for his creatures. The unguarded grocery bag in the back of the pickup truck? God provided this meal, too. Dumpsters, berries, carrion, small rodents, and even another raven’s stockpile—all these are provided by God. God intentionally controls circumstances to feed hungry ravens.

God’s creatures never act independently. He is always directing their actions to accomplish his will. This aspect of divine providence is called concurrence. In concurrence, “God cooperates with created things in every action, directing their distinctive properties to cause them to act as they do.”2 Even in actions we think of as natural occurrences—actions caused by a creature’s instinct and a whole chain of cause and effect—God is accomplishing his will. In one sense, ravens eat because they find food using their raven talents and instincts. But in another sense, ravens eat because God feeds them. He directs the circumstances and preserves the ravens’ clever nature so they are fed.

What’s more, not only do ravens receive food from God’s providence, but they are also instruments of God’s providence. Do you remember when they fed the prophet Elijah? God told Elijah to hide by the brook Cherith during a drought. “You shall drink from the brook,” God said, “and I have commanded the ravens to feed you there.” Elijah obeyed, and just as God promised, “the ravens brought him bread and meat in the morning, and bread and meat in the evening . . . .” (1 Kings 17:1-6).

When the ravens brought food to Elijah, it’s possible God was turning the natural order on it’s head, but I think this is another example of concurrence. I believe God directed the ravens according to their distinctive natures as ravens so their actions accomplished his purposes. He provided for Elijah using ravens who scavenged bread and meat as ravens do. He used the ravens’ natural drive to stockpile extra food, directing the circumstances so they brought it near Elijah as he hid by the brook. I think the ravens did what ravens do, and in the providence of God, the prophet Elijah was fed.

2] Wayne Grudem's Systematic Theology, page 317]
This post is an edited version of one posted on my personal blog several years ago.
Posted by Rebecca Stark at 4:30 AM No comments:

In the light of current events

My opinion of politics has been marred ever since President Richard Nixon resigned in disgrace. I may have only been a kid at the time, but even a kid knows cover-ups and lying aren't right. Any standard of "right" has undergone a slow deterioration from bad to worse over the years, so I am not encouraged by the state of my nation.

It is also easy to become fearful and wonder what will happen to the church-at-large given the political and social climate. But the culture has never been a good metric of the progress of the Kingdom of God. History has shown time and time again that the gospel spreads and the church flourishes in the most adverse circumstances, proving once more that the foolishness of God is wiser than men. (1 Cor. 1:25)

I am not advocating being an "ostrich," but there comes a point when I need to turn off the news feed. A glut of people's opinions only reinforces the blinders of an earthly perspective. Maintaining a heavenly point of view can only come from reminding myself of what is true, and I certainly won't get that from the media.

So in the light of current events, I remind myself:

Everything that can be shaken seems to be shaking, but we have received a kingdom that cannot be shaken. (Hebrews 12:25-29)

God will never abdicate His rule and authority over all things. (Psalm 2:1-12)

Jesus is building His church around the world, and the gates of hell will not prevail against it. (Matt. 16:18)


And further encouragement from J.C. Ryle on Matthew 16:


In the next place, let us take care that we understand what our Lord means when He speaks of His Church.

The Church which Jesus promises to build upon a rock, is the "blessed company of all believing people." It is not the visible church of any one nation, or country, or place. It is the whole body of believers of every age, and tongue, and people. It is a church composed of all who are washed in Christ's blood, clothed in Christ's righteousness, renewed by Christ's Spirit, joined to Christ by faith, and epistles of Christ in life. It is a church of which every member is baptized with the Holy Spirit, and is really and truly holy. It is a church which is one body. All who belong to it are of one heart and one mind, hold the same truths, and believe the same doctrines as necessary to salvation. It is a church which has only one Head. That head is Jesus Christ Himself. "He is the head of the body." (Col. 1:18.) ...

In the last place, let us mark the glorious promises which our Lord makes to His Church. He says, "all the powers of hell will not conquer it."

The meaning of this promise is, that the power of Satan shall never destroy the people of Christ. He that brought sin and death into the first creation, by tempting Eve, shall never bring ruin on the new creation, by overthrowing believers. The mystical body of Christ shall never perish or decay. Though often persecuted, afflicted, distressed, and brought low, it shall never come to an end. It shall outlive the wrath of Pharaohs and Roman Emperors. Visible churches, like Ephesus, may come to nothing. But the true Church never dies. Like the bush that Moses saw, it may burn, but shall not be consumed. Every member of it shall be brought safe to glory, In spite of falls, failures, and short-comings--in spite of the world, the flesh, and the devil--no member of the true Church shall ever be cast away. (John 10:28.)

From Expository Thoughts on Matthew by J.C. Ryle
Posted by Persis at 5:00 AM No comments:

Taking the risk with Christian community

I was sitting in a Jeep Cherokee on the way to a training course with several coworkers. We had stopped at a red light when we heard the sound of squealing metal behind us. The driver may have seen what was coming in the rearview mirror, but I was unprepared. The Jeep lurched forward as we were rear-ended by the tractor trailer whose brakes announced its imminent arrival into our bumper. Thankfully our vehicle wasn't totaled, and no one was hurt other than a few stiff backs. But 30 years later, I still get nervous when I see a large truck pull behind me while I'm waiting at a light. If there's room, I will edge forward just a wee bit to give it a little more braking room because I vividly remember what happened before, and I don't want it to happen again.

There have been other incidents in my life that I don't want repeated. Even though years have gone by, the wounds are in various stages of healing and are still tender to the touch. So my default is to pull away relationally to maintain a safe distance. In the past, I was very much alone during my trials, so I knew I needed the support of Christian community. Yet I unconsciously braced myself, waiting and wondering if I would be hurt again, even inadvertently, if someone got too close to one of my sore spots. Thus I found myself in a catch-22 situation. I wanted help but was wary of being hurt, so that fear kept me from getting the help I needed. To compound the situation, there was no shortage of lies from the pit to cast doubt and increase distrust.

But fear of man, and especially an unfounded fear of believers I know and love, cannot be trusted, so I reached out to my church and asked for help, and my fears were proven to be wrong. I am still wrestling with the aftermath of past trials, so was I let down? Absolutely not! The absence of a cure-all does not mean an absence of care. I needed to take the risk to stop bracing myself, waiting to be rear-ended, and slowly let down my guard. Others took the risk of possibly saying the wrong thing or having to admit that they did not even know what to say. But as the dialogue continues, we will grow in understanding and love for one another. It may even encourage others to come forward and open up as well. This doesn't happen overnight but takes time, grace, and vulnerability. But perhaps the real benefit in community isn't in how quickly problems get fixed, but the covenant commitment to walk together for the long haul.

I therefore, a prisoner for the Lord, urge you to walk in a manner worthy of the calling to which you have been called, with all humility and gentleness, with patience, bearing with one another in love, eager to maintain the unity of the Spirit in the bond of peace. Eph. 4:1-3

Posted by Persis at 5:00 AM No comments: