A Community of Thanksgiving

Years ago, back in the days when the internet blog world was more of a community, I hosted something I called November’s Thanksgiving at my personal blog. Every day for the whole month, I’d post a few things I was thankful for and invite others to join me. All that thankfulness made what can be a dreary month a joyful one.

I miss those days!

I’m going to try to resurrect that community of thanksgiving here on this day before Thanksgiving. (We’re sort of a sisterhood here at Out of the Ordinary, right?) I’ll list a few things I’m thankful for and then open the mikes (so to speak) to you.

What are you thankful for? Let’s fill this place with thanksgiving!

Lot’s Wife—a Woman to Be Remembered

Perhaps one of the most chilling admonitions in Scripture can be found in  the words  of  Christ,  “Remember Lot’s wife!”    Speaking to His disciples, Christ foretells  how His  return to judge the world  will be unexpected and  that judgment will be as swift  as  it was in the days of Noah and Lot.    The abiding truth  “He who has found his life will lose it, and he who has lost his life for My sake will find it.” (Mt. 10:39)  is a sobering  warning for people in every age.    Who was this woman who lived nearly 2,000 years before Christ and why does He want us to remember her?

Mrs. Lot’s name is never mentioned in Scripture nor do we know where she came from.    She could have been among the Chaldean servants whom Abram,  Sarai, and  his nephew Lot  brought with them from Ur (Gen. 12:1-5),  or she may have been a  native Canaanite.
As you recall,  after settling in Canaan  Lot and Abraham decided it best to part company and Lot pitched his tents near the  wicked city of Sodom  (Gen. 13).   Later,  when  the LORD  appeared to Abraham and sent two angels to obliterate Sodom and Gomorrah,  Abraham  interceded  and the LORD agreed to spare them if they could find even ten righteous people.
Arriving in Sodom,   Lot  welcomed  the  two  celestial guests but   "every man"  in the city surrounded his home  and demanded to have relations with the angels.  (Gen. 19:4-5).   When Lot’s pleas to silence the mob failed he tried offering them his two virgin daughters,  which enraged them all the more.    Threats of violence ensued and the angels pulled Lot to safety and then  miraculously struck  all the  men with blindness.     When the angels  asked if there were  other relatives  not in the house Lot  went out to warn  his  daughter’s  fiancées,  but they thought he was joking.   The following morning the angels said,
“Up!  Take your wife and your two daughters who are here, lest you be swept away in the punishment of the city.”   When he lingered  the men seized  Lot, his wife and his two daughters by the hand  and brought them  outside of  the city. ”  Gen. 19:15-16
We don't  know why Lot hesitated,  but we know that when the angels snatched them to safety  Lot and his daughters did not look back but his wife  did.
“But Lot’s wife,  behind him,  looked back,  and she became a pillar of salt.” Gen. 10:26
The account of Lot's wife is a frightening reminder that one can  have ample knowledge of the truth and experience the goodness of the Lord,  and yet have an unregenerate heart anchored to the world.     Peter tells us that she was married to a righteous man who was daily vexed by the evil in their city  (2 Pet. 2:7-8).     In order for Lot to have been declared righteous he would have had to believe the Gospel that was preached to Abraham in accordance to  Galatians 3:8:
“And the Scripture, foreseeing that God would justify the Gentiles by faith, preached the gospel beforehand to Abraham, saying, “In you shall all the nations be blessed.”
It's  likely this woman had also seen the  godly examples of Sarah and Abraham and knew of their miraculous deliverance from Egypt.   She  had witnessed  the  violence  in her city towards her guests, her husband, and potentially  her daughters and experienced God’s divine intervention.   She was mercifully brought to safety  while the heavens rained fire and brimstone,  and  yet  she looked back.   This was no ordinary glance out of curiosity because the Hebrew  word  "wat·tab·bêṭ",  which is only used 3 times  in the Old Testament,   implies  that her  heart was still tethered to  Sodom.

"That look was a little thing, but it told of secret love of the world in Lot's wife.  ... Her eye turned to the place where her treasure was — as the compass needle turns to the pole.  And this was the crowning point of her sin. "The friendship of the world is enmity with God" (James 4:4). "If any man loves the world,  the love of the Father is not in him" (1 John 2:15)  …She was no murderess, no adulteress, no thief; but she was a professor of religion, and she looked back.”  J.C. Ryle (1)

“Remember Lot's wife”.    The Bible warns that Christ will return when we least expect it.    And even if He doesn’t return in our lifetime,  we  could die before the day is over.  (Luke 12:20).   Lest we find ourselves among the self-deceived who are banking on our religiosity to save us,    we  must  consider the gravity of Christ's words.    We are commanded to examine ourselves to make sure our faith is genuine  (2 Cor. 13:5).  Do we secretly find our  fulfillment in  forbidden  pleasures,  riches,  or  the applause of this world instead of  Christ who died for us?    Can we say with Paul  "I have been crucified with Christ.   It is no longer I who live, but Christ who lives in me. "?  (Gal. 2:20).    Recently  I posted  20 Surprising Ways a "Believer" Can Be Self-Deceived ,   which is a synopsis of  the Puritan Matthew  Meades’  challenging  book  The Almost Christian  Discovered.    This is one of those gems I believe every professing  believer should have in their  library.
Lot’s wife was found lacking but God's children can  be encouraged  by this account because it also powerfully demonstrates that God will preserve His elect.   The Scriptures promise that  He will not allow us to be tempted beyond what we are able but will provide a way of escape that we  may endure it  regardless of how wicked our culture is (1 Cor. 10:13),
“and if he rescued Lot, a righteous man, who was distressed by the depraved conduct of the lawless (for that righteous man, living among them day after day, was tormented in his righteous soul by the lawless deeds he saw and heard)— if this is so, then the Lord knows how to rescue the godly from trials and to hold the unrighteous for punishment on the day of judgment”  2 Peter 2:7-8
(1) Holiness: It's Nature, Hindrance, Difficulties, and Roots; Chapter 10;  by J.C.Ryle; 1877
Image:  Dead Sea - Lot's Wife
* This edited article was originally posted on my blog for the Women in Scripture  series  (2013)  which most of us here at OOTO contributed to.
Posted by Anonymous at 5:00 AM No comments:

A Golden Calf and the Big Truth Exchange 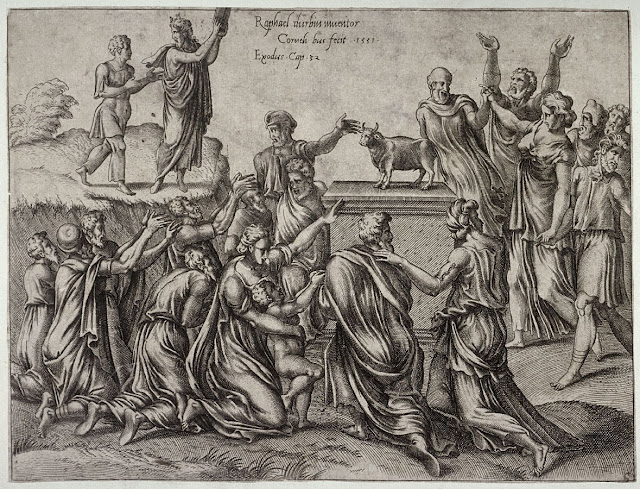 Do you know the Old Testament story of the golden calf (Exodus 32:1-6)? Moses, the leader of the people of Israel, went up on Mount Sinai to receive the Ten Commandments and other instructions from God. He was gone for forty days and the people grew anxious without him, so they asked Aaron, the priest, to make gods to lead them in Moses’s absence. Together with Aaron, then, they made a golden calf to worship. It’s shocking how quickly they turned to polytheism and idolatry, breaking both God’s first commandment—“You shall have no other gods before me. (Exodus 20:3)—and his second—“You shall not make for yourself a carved image” (Exodus 20:4).

But there’s something else to note: When the Israelites made the calf, they said, “These are your gods, O Israel, who brought you up out of the land of Egypt!” In their minds, the one golden calf was not their only god. They were, it seems, crediting the calf with working with the one true God to bring them out of Egypt. They may not have been denying that God brought them out of Egypt, but rather, denying that he had done it alone. And when they feasted after sacrificing to the calf, they called it “a feast to Yahweh.” Yahweh is the true God’s name, so when they celebrated, they were trying, in their twisted way, to honor God. And as they tried to honor him, they got at least two details about God right. They called him by the right name, and they acknowledged one of his works.

But a few right ideas about God didn’t keep the Israelites from idolatry. Even as they attempted to worship him, their minds remade the one true God into a smaller, weaker god. They reimagined him as a god who wasn’t powerful enough to accomplish his will without help from other powers, and one who was willing to share his glory with an image they had crafted from things they owned.

Their story is evidence of what the apostle Paul writes in Romans 1: All people are naturally inclined toward idolatry. The Israelites exchanged “the glory of the immortal God for images resembling mortal man and birds and animals and creeping things” (Romans 1:23) and “the truth about God for a lie” (Romans 1:25)—and it didn’t take them long to do it. We read their story and wonder how they could have been so foolish, but worshipping a carved image alongside Yahweh didn’t seem bizarre to them because believing in multiple gods and practicing idolatry were normal in the culture they came from. We live in a different culture and time, and aren’t surrounded by idol worshipping polytheists, so we might never build an actual golden calf to worship, but as fallen people we too are prone to idolatry. Like the Israelites, we are naturally inclined to reimagine God as someone or something more like “mortal man” than the glorious almighty God he is. Even though we might never fall as far and fast as they did, to the extent we view God as different from the One he has revealed himself to be, we have also “[exchanged] the truth about God for a lie.”

Erin, a young woman I once knew, liked to think of God as spontaneous (to use her word), because she thought a spontaneous god would be more exciting than one who planned everything ahead of time. But we know the true God isn’t spontaneous. He has told us he has a plan and he always sticks to it. When Erin imagined that God was impulsive, she was exchanging the truth of God who is always the same for the lie of one who changes from moment to moment. She may have believed many accurate things about God, but this didn’t keep her from building a false image of him in her mind—and all because, like many her age, she placed a high value on living in the moment without a plan for the future. She preferred a god who was more like she was.

Like the Israelites and Erin, we have a natural inclination to view God as more like us than he is, and more like whatever the culture around us values than he is. But thankfully, the Spirit works within us to fine-tune our thoughts about God as we study his revelation of himself. Yes, until we see him face to face, the picture of God we hold in our minds will never be exactly right. Even our best thoughts of God will be a little idolatrous, but the more we work to conform our thoughts to what God has told us about himself, the more clearly we will know him, and the more truly we can worship him.
Posted by Rebecca Stark at 4:30 AM 1 comment: