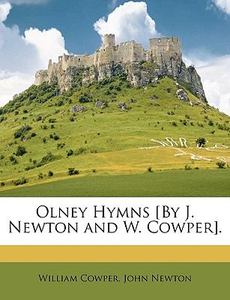 by William Cowper and John Newton.

[This is a review (sort of) I wrote for November's newsletter at my church. The copy of the Olney Hymns in our library looks like the picture on the right, but there are various reprinted versions. You can find all of William Cowper's Olney Hymns online, too.]

William Cowper’s childhood was full of difficult things and he was not what we would call a "resilient child." As an adult, he suffered from depression, attempting suicide several times during his life. After his first suicide attempt, he became convinced that his sin, especially his attempted suicide, was so offensive to God that there was no way for him to be forgiven. He was sure he would forever remain under God's wrath.

The conviction that he was beyond the reach of God’s forgiveness drove him deeper into despair and he was sent to a mental asylum. In the asylum, he was under the care of Dr. Nathaniel Cotton, who held out hope of God’s forgiveness to Cowper, but Cowper was unconvinced.

What finally convinced him? It was reading scripture while in the asylum. He was persuaded by Romans 3:25, which says that God put Christ forward "as a propitiation by his blood, to be received by faith." He understood immediately that his only hope was in the one sacrifice sufficient to turn away God’s wrath—the “propitiation by his blood”—and he believed.

I wish I could tell you that Cowper's conversion immediately solved all his problems, but he continued to suffer bouts of mental illness throughout his life, and even attempted suicide again, perhaps two or three more times. The assurance of salvation that he had at his conversion did not continue without interruption. For long periods he would become convinced that ultimately he would be what he called a “castaway”; that is, in the end, Christ would say to him, “I never knew you.” I suspect this was the compulsive thinking of a sick mind. After all, he truly believed that all those who trusted Christ were surely saved, and he also knew that he trusted Christ. Yet he couldn’t rid himself of the fear that he was the one and only exception to the promise, the only person who ever lived who would trust Christ and still be rejected.

In God's providence, Cowper came to live in Olney Parish where John Newton was pastor. Newton took Cowper under his wing, visiting him almost daily for thirteen years. Newton encouraged Cowper, a talented poet, to write hymns to be sung in the church at Olney, and collaborated with him to produce the well-known Olney Hymns, a project planned in part to give a hopeless man a sense of purpose. Their effort gave us a hymnal, first published in 1779, that includes several hymns found in our modern worship hymnals.

I love Olney Hymns for Cowper's hymns especially. Because of his illness, he contributed only 67 of the 379 hymns, but his verses include some of the finest poetry found in hymns. And knowing a little of Cowper's story makes them even more remarkable. When you read the words of Cowper’s best known hymn, There Is a Fountain Filled with Blood1 ("and sinners plunged beneath that flood lose all their guilty stains"), set them against the background of his conversion. Because Cowper felt so deeply the despair of condemnation for sin, he understood more fully that his only hope was Christ's sacrifice.

There’s no big happy ending to Cowper's life. His very last words were not of hope, but of despair. I knew someone who thought it was a mistake for the church to continue singing Cowper’s hymns, since, they explained, he’d rejected Christ. I don’t think there’s any evidence he rejected Christ, just that he didn’t find the peace in Christ in this life that we’ve come to expect from conversion. This makes his story a puzzle for us.

Still, there is hope in Cowper’s story. He was a miserable man from whom we received wonderful poetry and some of our most uplifting hymns. The products of his tormented mind bring joy and peace to ours. John Piper says the fact that so many people find encouragement from Cowper’s life should teach us that when we want to encourage others, we “must not limit ourselves to success stories.”2

Cowper’s life is proof of the truth of one of his hymns from Olney Hymns, a hymn he called Light Shining Out of Darkness:


God moves in a mysterious way
His wonders to perform;
He plants His footsteps in the sea
And rides upon the storm.

Deep in unfathomable mines
Of never failing skill
He treasures up His bright designs
And works His sovereign will.

Ye fearful saints, fresh courage take;
The clouds ye so much dread
Are big with mercy and shall break
In blessings on your head.

Judge not the Lord by feeble sense,
But trust Him for His grace;
Behind a frowning providence
He hides a smiling face.

His purposes will ripen fast,
Unfolding every hour;
The bud may have a bitter taste,
But sweet will be the flower.

Blind unbelief is sure to err
And scan His work in vain;
God is His own interpreter,
And He will make it plain.

The clouds of Cowper’s hopelessness are big with blessings for us, and someday the puzzle of his life will be made plain when God interprets it for us.
1The title in Olney Hymns is Praise for the Fountain Opened.
2The Hidden Smile of God, John Piper, page 116.

Posted by Rebecca Stark at 6:00 AM