Away in a Manger

When I was six years old, we lived in the city of Winnipeg, Manitoba.  The rented house we lived in was full of really dark, ugly, 70's style panelling.  It was the 70's, so it was fitting.  The darkness of the house was one of the reasons my mother didn't like it.

The good thing about that darkness was what happened when my mother put up the Christmas decorations that year.  On the tree, she loved to use red and blue bulbs so that the room would be filled with purplish shadows.  The darkness of that house meant that when the lights of the tree and the other decorations were turned on, the lovely, cozy glow throughout the room was much more noticeable than it might have been had the walls been lighter.  That year, I felt like I was walking into another world when I went into the living room.

Situated by the tree, on a coffee table, was a small nativity scene.  It was nothing spectacular.  It was cheap plastic, and quite fragile.  My parents are not people of faith, but were Catholic, so there was the obligatory feature of the nativity.  The decoration was simply part of tradtion for my mother.

One morning, I woke up in the darkness along with my father, who was always the first one up.  I went into the living room after he plugged in the lights on the tree, and I sat in the soft glow of the lights where the nativity set was. From my place on an ottoman, I looked at the nativity scene and quietly sang "Away in a Manger."  I picked up the tiny plastic Jesus and sang to him.  I didn't really know who he was, but I was drawn to him.

I never forgot that moment, and fourteen years later, after I was converted, during that first Christmas as a new creation, I thought about that old nativity scene and the curious child who sang beside it so long ago.  The old nativity scene had crumbled many years before, but my mother had a newer and nicer one.  Every Christmas between that one in 1972 and the one in 1985, I had wondered what that nativity scene really meant.  Now, I was beginning to understand these words, which I had first heard years ago watching "A Charlie Brown Christmas:"


8 And in the same region there were shepherds out in the field, keeping watch over their flock by night. 9 And an angel of the Lord appeared to them, and the glory of the Lord shone around them, and they were filled with great fear. 10 And the angel said to them, “Fear not, for behold, I bring you good news of great joy that will be for all the people. 11 For unto you is born this day in the city of David a Savior, who is Christ the Lord. 12 And this will be a sign for you: you will find a baby wrapped in swaddling cloths and lying in a manger.” (Luke 2:8-12)

Christmas had become more than just a seasonal event for me.

Christmas has a way, still, of drawing people to thoughts of Jesus.  Whether one is an inquisitive six year old girl or someone older, there is something moving about that young family in Bethlehem, about that young girl having to deliver her child, but finding nowhere to rest.  The miracle of the child conceived by the Holy Spirit is still something that moves people.  We may be in a post-Christian world now, but the proclamation of the Advent of the Messiah will draw people.

While saying "Merry Christmas" is becoming politically incorrect, and "Happy Holidays" becoming more acceptable, this time of the year is still an opportunity to proclaim the Incarnation, whether we share it verbally, or have things in our home like small nativity sets which may prompt someone to think about  Jesus.  One year, my children sat with my parents, and using our nativity scene, told my parents the story and about needing to be born again. It was a precious moment.  Since our children were born, we have always made sure we have a nativity scene up at Christmas.   This year, I got a new one: 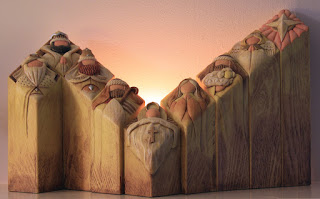 Don't miss the opportunities to share this story with those you rub shoulders with over this season.  Share it with your children regularly, with their friends, and your family.  Find little ways to share the wonder and the beauty of the Incarnation however you can.  You may be the means by which someone comes to understand the meaning of the child in Bethlehem.
Posted by Kim Shay at 6:05 AM